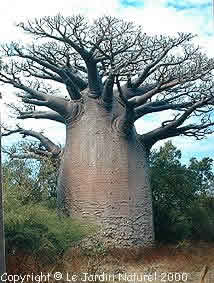 The African baobab is the most important in number and also the better known among the eight species.

Indigenous in the semi arid part of the sub-Saharian Africa.

It is clear that the distribution of the species throughout the dry parts of Africa is mainly due to humans.

Adansonia digitata has a character which is unique in the genus: pendulous flowers.

The tree is usually massive, reaching 25m in height and up to 12 m in diameter, with irregular crown.

Flowers of Adansonia digitata are white.

The fruits are variable, globose to ovoid.

The Australian baobab is a small (rarely taller than 10m ) irregularly shaped tree often with multiple trunks, and irregular crown.

It is restricted to the north western area of Australia

The flowers are white to pale cream

One of the six species of baobabs endemic from Madagascar, perhaps the better known of Malagasy baobabs, and for a lot of people, the most aesthetical of all baobabs. A pure gem. Often represented on the front cover of books dealing with Madagascar.

Occuring near Morombe and Morondava in the west part of Madagascar

The crown is at the top of the tree and flat; the branches are regurlarly distributed, mainly horizontal.

Fruits are subglobose to ovoid with a reddish indumentum. The pericarp is thin and fragile.

Found in dry or moist forest in the Mahajanga province and also in the North.

Small to large baobabs (5 to 20m) with variable shapes of trunks from bottle to cylindrical and irregular crown. 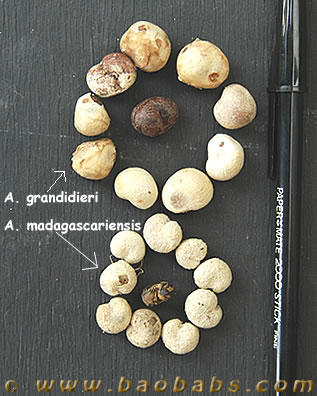 Seeds of A.madagascariensis are quite half in size compared to seeds of A.grandidieri

We are proud to offer to our customers seeds of verified species, this for all species that we propose for sale on our web site.

The "smallest" baobab of Madagascar.

The trunk is bottle shaped with a distinct constriction beneath the branches.

The crown is irregular.

Bark is usually redish brown when mature, but grey and rugous when young.

Easily recognizable when young by the serrate leaves.

Perhaps the most endangered species of baobab.

Less than 10 populations are actually known.

Restricted to the North of Madagascar near Antsiranana.

Medium to tall trees up to 30m.

Restricted to the north of Madagascar near Antsiranana.

It can be considered as an endangered species of baobab.

Large trees up to 25m tall and 2m in diameter.

The most widespread baobab of Madagascar, occuring in south, west and northwest.