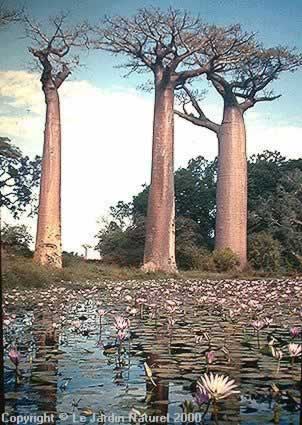 The malagasy baobabs occur generally in deciduous forests in the half west part of the island. Some areas are appropriately named " baobab forests " because the baobabs constitute the dominant tree species.

Concerning the interaction with animals and with humans, the ecological role of baobabs is very important.

The forms of the trunks are variable, from bottle-shaped to tapering or cylindrical or irregular.

But baobabs are very distinctive from other trees and easily recognizable.

Their bark is smooth and the wood is fibrous and soft, stocking water for the long drying periods.

The baobabs are deciduous trees, without leaves for many months. That is an explanation to the common name "upside down tree".

Easy to grow, baobabs are suitable as bonsai (see cultivation page) or indoor plants as well as outdoor plants (in tropical or subtropical countries in that case).