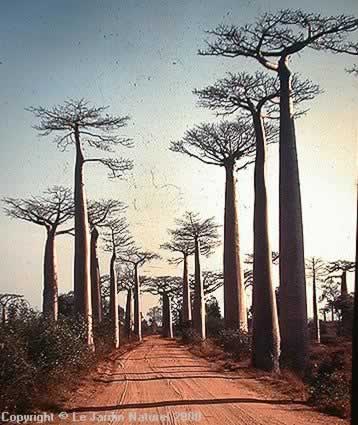 The Baobabs (genus Adansonia) are hardy tropical plants and so easily suitable as indoor plants or bonsai plants .

Depending of the species cultivated and the conditions of cultivation, they are often dormant and without leave for a part the year.

The seeds are reniform, generally about 12-14 x 10-12 x 9-10 mm, excepted for seeds of Adansonia suarezensis which are bigger.

The sowing is simple and easy. But the germination can be eratic, either occuring quickly with a good ratio or long with a bad ratio. It depends of the temperature and humidity of the soil, and certainly of other parameters which are not well known.

Some weeks after sowing

Generally in good conditions, seeds germinate after a week to 10 days.

Put the seeds in a pot in half soil half humus; cover the seeds with about 1.5cm of the medium, water it every day and wait...

The fact that the first "true" leaves are foliolate or not is variable, even upon a single species, I think that it also depends of the conditions of cultivation. But generally, the frist leaves are not foliolate

The Adansonia species are generally easy to grow in pots as indoor plants or bonzai and are resistant to dryness. They are quickly developping an underground caudex. 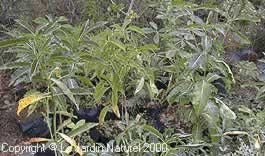 Cultivation in the nursery of Le Jardin Naturel

They are some notable differences between the species concerning growing speed.

Adansonia gibbosa (the Australian baobab) is very slow and extremely sensible to rot and demand high temperatures for growing.

At the other side, Adansonia digitata ( the African baobab) is fast growing and well resisting to rot attacks.

The medium for cultivation must be well draining and I suggest to add some river sand to the mixing of half humus half soil. 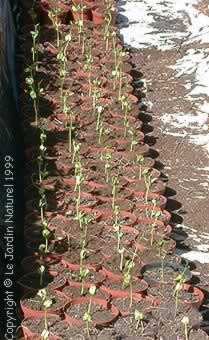 Cultivation in the nursery of Le Jardin Naturel

The plants can be well watered during the hot season and soil must be kept quite dry during the dormance which occurs generally from the end of summer to spring.